You Will Get Sick

Call For Tickets
In Noah Diaz’s You Will Get Sick, a young man is shocked to receive a life-changing diagnosis.

You will meet a young man holding onto a secret and the stranger he pays to listen. You will laugh, marvel, and transform from the relationship that grows between them, and from the stunningly human new play—a New York Times Critic’s Pick, (hooray!)—that “tells its tale in the most lively, surreal and surprising ways imaginable,” as the Times goes on to say. ‘It flies by, feeling even shorter yet fuller than its 85 minutes.”

You will think about it for days.

“Defies all expectations, telling the tale in the most lively, surreal and surprising ways imaginable. It flies by, feeling even shorter yet fuller than its 85 minutes. Linda Lavin’s wit is in full bloom. She has never seemed more vital, sly, and fearless.” Jesse Green, The New York Times – Critic's Pick

“Words like charming and whimsical and even downright funny aren’t ones you usually associate with a play about illness and death. In the case of Noah Diaz’s You Will Get Sick, you might also add the word more than a little bit fey.” Robert Hofler, The Wrap

10 or more tickets
To purchase fewer, visit our partner for You Will Get Sick.

85 minutes, with no intermission

12/11/2022
For all performances through December 31, 2022 at the Harold and Miriam Steinberg Center for Theatre (Laura Pels Theatre and Roundabout Underground) all audience members will be required to wear a properly fitting mask over the nose and mouth in the theatre except when eating or drinking. Certain seating locations, based on the proximity to the actors, may be required to wear a provided mask. Policies for performances beginning January 1, 2023 will be announced at a later date.
Call For Tickets 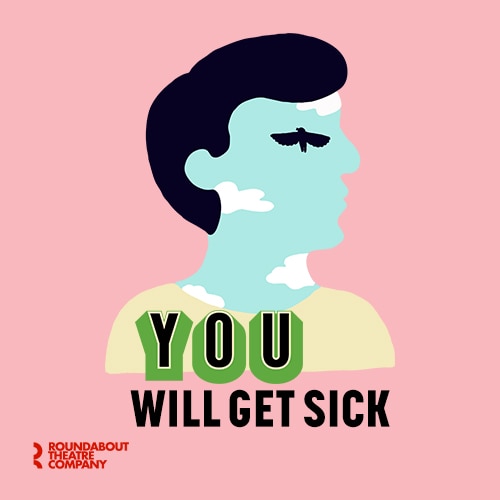 You Will Get Sick