Follow an experienced Black stage actress through rehearsals of a major Broadway production in Alice Childress's wry and moving look at racism, identity, and ego in the world of New York theatre. At the forefront of both the Civil Rights and feminist movements, the prescient Trouble in Mind opened to acclaim off-Broadway in 1955, and was announced to move to Broadway in 1957...in a production that never came to be.

“The play of the moment.” – Jesse Green, The New York Times (Critic’s Pick)

“It will take your breath away.” – Mark Kennedy, Associated Press

Recommended for 11 +
Children under the age of 4 are not permitted in the theatre.

2 hours and 10 minutes, including intermission

All audience members will be required to show proof of vaccination, which clearly identifies the vaccine received and the date of the last dose, along with a corresponding photo ID for audience members 18 years of age and older.

Children under age 5 are not permitted in the theatre.

If you are unable to provide the requested documentation at this time please contact Audience Services for assistance in rescheduling. Any ticket holder unable to meet vaccine and/or testing requirements will be denied entry.
View All Shows 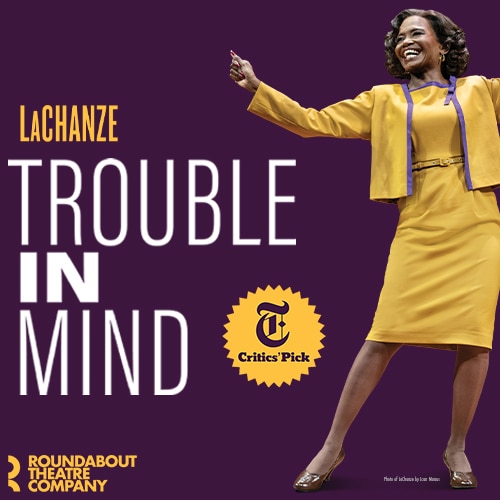