View All Shows
This show played its final performance on Sunday - November 20.

Gabriel Byrne's Walking with Ghosts comes to Broadway for 75 performances only.

As a young boy growing up on the outskirts of Dublin, Gabriel Byrne sought refuge in a world of imagination among the fields and hills near his home, at the edge of a rapidly encroaching city. Moving between sensual recollection of childhood in a now almost vanished Ireland and a commentary on stardom in Hollywood, he returns to Broadway to reflect on a life’s journey.Gabriel Byrne on stage. In his own words.

Adapted by Gabriel Byrne from his best-selling memoir of the same name, and directed by Emmy award-winning director Lonny Price, Walking with Ghosts is by turns hilarious and heartbreaking, a lyrical homage to the people and landscapes that ultimately shape our destinies.

FIVE STARS "One of Gabriel Byrne’s greatest achievements." - The Telegraph

FIVE STARS “An effortless masterclass in storytelling. " - The Stage

“Gabriel Byrne is a master of his craft.” - The Sunday Times

“Spellbinding and hugely entertaining" - The Times

Recommended for ages 12 + (Strong language, adult themes)
Children under the age of 4 are not permitted in the theatre.

2 hours and 15 minutes, including a 15 minute intermission 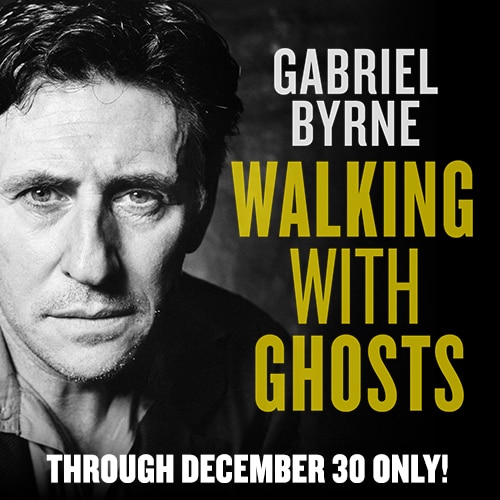