Fiddler on the Roof in Yiddish

Find Tickets
Fiddler on the Roof in Yiddish is back by popular demand for seven weeks only in an Off-Broadway limited engagement at New World Stages, directed by Academy Award and Tony Award winner Joel Grey and starring Steven Skybell as Tevye.

Tevye is a milkman and mentsch navigating family, faith, and changing traditions in the little Russian shtetl of Anatevka at the turn of the 20th century. As his daughters grow up and get married in ways that challenge the status quo, Tevye must adjust to changing times and encroaching antisemitism in the only home he’s ever known. Joyful, heartfelt, and sometimes devastating, Fiddler on the Roof in Yiddish “offers a kind of authenticity no other American Fiddler ever has” (The New York Times).

Don’t miss the beloved story of a community and its struggle to balance traditions and desires in a changing world. The little town of Anatevka will bustle with the sounds of mame-loshn in the Yiddish language adaptation of Fiddler, with English and Russian supertitles.

With direction by Academy® and Tony Award®-winner Joel Grey, this production “speaks to us all” (Newsday). It has been hailed as “a richer, deeper interpretation” by The Wall Street Journal, “a mitzvah” by Time Out New York, and AM New York gives it four stars, calling Fiddler on the Roof in Yiddish “perfect.”

Harold Prince, the legendary and original producer of Fiddler on the Roof on Broadway (1965 Winner of 9 Tony® Awards, including Best Musical) says, “If you have seen Fiddler before, you must see this production because it will make you feel you are seeing Fiddler for the first time.”

12 or more tickets
To purchase fewer, visit Telecharge for Fiddler on the Roof in Yiddish.

Recommended for ages 8 +
Children under the age of 4 are not permitted in the theatre.

3 hours, including one intermission 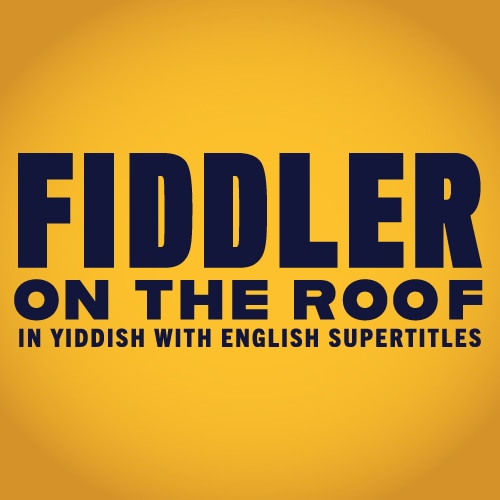 Fiddler on the Roof in Yiddish