On Tuesday, September 25, the Broadway League hosted a free concert in the heart of Times Square to celebrate Viva Broadway, an audience development partnership that aims to bridge the world of Broadway with Latino audiences around the country. This year, to celebrate Hispanic Heritage Month, the League invited Broadway performers of Latino backgrounds to join them in song—and Broadway Inbound was there!

Though it was a little rainy during setup and sound check, the performers—total pros—managed to brighten things up with their energy and enthusiasm, as they gave interviews and took pictures with all in attendance. As Charlotte St. Martin, President of the Broadway League, took the stage to kick off the event, the rain ceased, umbrellas were closed, and everyone settled in for a treat. After her welcoming remarks, Charlotte introduced Luis Miranda, Chairperson of Viva Broadway and father of Hamilton composer Lin-Manuel Miranda, who greeted everyone and expressed his pride in the success of the Viva Broadway program in doubling the Latino audience on Broadway over the past year to nearly 1.4 million patrons. 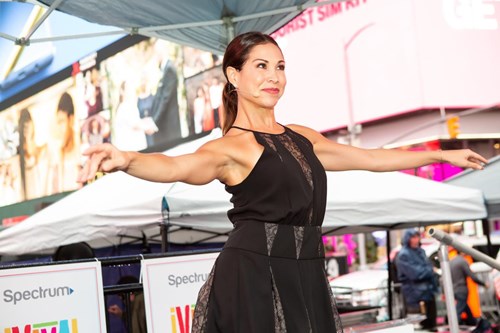 Next on stage was the enthusiastic Bianca Marroquin, actress (Chicago, In the Heights) and National Viva Broadway Ambassador. She sang “Perfidia” for the growing crowd and welcomed everyone to Viva Broadway. After rousing applause, she introduced Enrique Segura, currently performing on Broadway as Ed the Hyena in The Lion King. Enrique spoke of his Mexican heritage and family experiences growing up and then sang “Viva Mexico,” complete with signs the prompted the audience to sing along to the lyrics “¡Viva Mexico!” and “Viva America!,” which he joked were conveniently written in both Spanish and English. 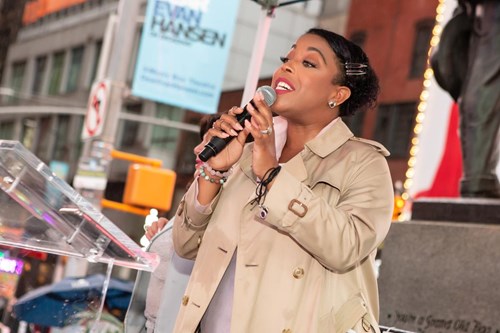 The next performer was Aladdin performer and vocal powerhouse Kathryn Allison who, belted out a stunning rendition of Ariana Grande’s “Into You” that stopped any passers-by in their tracks; the applause was thunderous. Marroquin returned to the stage, along with David Bushman and Michael Scirrotto, to perform “Me and My Baby” from long-running Broadway hit Chicago, in which she has performed the role of Roxie many times.

Other performers included Mandy Gonzalez of In the Heights and Hamilton, who sang a new single “Amor Sin Fronteras” from her upcoming album, and Ashley de la Rosa from Mean Girls, who performed “Never Enough” from the film The Greatest Showman. Perhaps the most emotional moment of the entire event came midway through the song, when she switched from English to Spanish. A ripple of delighted murmurs shot through the crowd as the audience was taken under her spell and the song drew to its stirring conclusion. 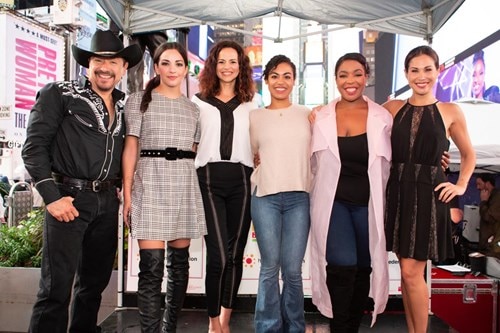 Finally, Ana Villafañe who portrayed Gloria Estefan in Broadway’s On Your Feet! closed the show in true diva fashion with a rousing rendition of “Don’t Cry for Me Argentina” from Evita. The crowd cheered, the performers took one final bow, and all in attendance knew that a future full of diverse and inclusive Broadway audiences was in good hands.

Find out more about Viva Broadway at https://www.broadway.org/info/viva-broadway, and be sure to look out for more Viva Broadway events if you’re visiting NYC.