Staff Picks: The Shows We're Head Over Heels For

Each and every group is unique. Whether you're coming with a tour group or celebrating Joseph's birthday, each group has its own specific needs when it comes to picking the perfect Broadway show. Fortunately, no one knows Broadway better than our team at Broadway Inbound. We're lucky enough to see almost every show that opens on Broadway, which makes every staff member a bona fide theatre expert.

Read the picks below, and stay tuned for even more Staff Picks next month. 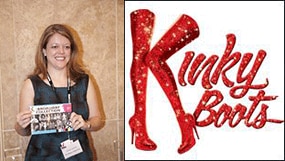 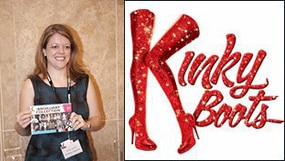 Dance has always been a big part of Allison’s life and through it she was introduced to musical theatre. She took her first dance class when she was 3 years old and never stopped. She knows how impactful a Broadway experience can be for a young person. The ability to facilitate the next generations of audience members, actors, dancers, and the myriad of people that come together to make a show a reality is a big part of her passion for Broadway.

All-Time Favorite Show: Sweeney Todd. I loved the last Broadway revival where the actors played their own instruments on stage. I have a vivid memory of Patti LuPone standing on a platform, playing a tuba with as much energy as she gave to any of the songs she sang in the show.

Allison Recommends: Kinky Boots. The story will touch your heart, and the message of acceptance brings me joy. Combine that with an outstanding cast that struts their stuff with the best footwear on Broadway, music by Cyndi Lauper that is so fun and will totally leave the theatre with you, you have the whole package.

Perfect For: This show reaches so many audiences, anyone that enjoys a big Broadway production with glitzy costumes, catchy songs, and creative choreography will certainly not be disappointed with Kinky Boots. 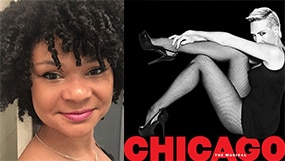 Chanelle also started dancing at young age and became instantly hooked on the feeling. Completely at home performing on any stage, (“though my Dad would call me a ham,”) Chanelle loves every aspect of putting on a show, from the ideation to the curtain call. “Believe it or not, my favorite part of any performance is the curtain call. It’s an incredibly powerful moment, the cast just put their whole heart and show into the performance, and the audience in turn gets to show how much they appreciated it.”

All-Time Favorite Show: I’m a total RENT-head. I saw it four times in one year, once. I still have a framed picture of the time I met Cary Shields (Roger) at the stage door when I was 16. I could die happy if just once I got to perform “Out Tonight” as Mimi Marquez, neon blue leggings, glitter in the hair and all!

Chanelle Recommends: Chicago is quintessential Broadway. It’s sultry, it’s scintillating, and celebrities have been known to pop in to the cast from time to time. One thing that sets this show apart from others is that the orchestra is on stage the whole time, incorporating them in to the show in a whole new way. I once was a little girl who dreamed of being a big-name performer, so I immediately identified with Roxie Hart as soon as she stepped on the stage.

Perfect For: Fans of Bob Fosse and anyone who loves a good crime story. Prepare to be razzle-dazzled.

Chicago in Three Words: All that jazz! 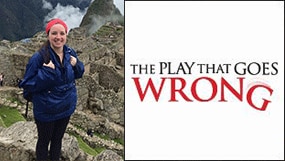 Maggie’s mother recalls her singing and dancing to Matilda on a coffee table. From there, she kept trying to figure out how to be a part of Broadway for the rest of my life. “It’s not easy to work in this industry. Every time I hear of a kid who was changed because of a show they’ve seen that has impacted them in a positive way, it makes any kind of struggle worth it. We have the ability to change people for the better and make them look at issues in a different light, why wouldn’t I want to do this?”

All-Time Favorite Show: Jesus Christ Superstar! My mother and I used to come up to New York every so often to rush shows. We got to see JCS in 2012, and it was a great experience.

Maggie Recommends: The Play That Goes Wrong has the entire plot in its title and combines the physical comedy of The Three Stooges with the heart of Monty Python. It is a train wreck in the best way possible; you can experience the worst theatrical mishaps without being terrified that someone is in actual danger. At one point, I was literally gripping my armrest, breathless from laughter and wondering how they could possibly save the catastrophe that had unfolded in front of me. There is a reason it’s the longest running play of the season!

Perfect For: Anyone who loves physical comedy and the theatre. It’s a great night out for friends, co-workers, theatre students, and everyone in between. I sat between first time theatre goers and Broadway vets, both of whom had a phenomenal time.

To purchase group tickets for The Play That Goes Wrong, click here. 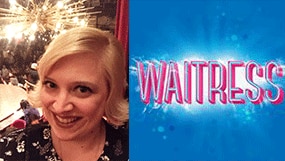 Kelly and her parents loved their first Broadway experience so much that they got tickets for another show the next night – a new show that had recently come out and was getting some good word of mouth – Wicked. It’s been almost 14 years since that weekend, and she will never forget seeing tears streaming down her parents’ faces in wonder and delight as the lights came up after “Defying Gravity.”

All-Time Favorite Show: Asking a theatre lover to choose their favorite show is like asking them to choose which one of their kids they love the most; it’s an impossible question. I think She Loves Me is pretty much the perfect show, and Wicked will always be one of my truest loves. Peter and the Starcatcher has some of the best storytelling I’ve ever seen.

Kelly Recommends: Waitress. It’s a must-see for anyone who is a mom and anyone who HAS a mom. Sara Bareilles’s music is the perfect fit for the source material, and you’ve gotta love a show that’s written by, starring, and helmed by WOMEN! The show has a giant heart, tons of humor, and an excellent score – it makes you think and gives you “Something to Feel.” I think anyone who sees it will find something to love!

Waitress in Three Words: Quirky, Charming, and Delicious (again – all that pie!)