Summer is in full swing, and we’re feeling the heat in New York City. There are so many ways to keep cool in the summer, but we think there’s something about hearing the familiar jingle of the ice cream truck coming around the corner that can’t be beat.

Since Broadway is super close to Cold Stone Creamery (241 West 42nd Street), we grabbed a bunch of the Broadway Inbound staff and created some custom ice cream flavors based on some of our favorite shows! We’d normally give you our Staff Picks, but this time it’s Staff Licks! 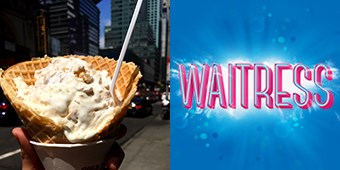 The Show: When a small-town waitress enters a baking contest in a nearby county, she must weigh her commitments against a rare shot at freedom and recognition.

The Ice Cream: “When I saw that apple pie filling and graham cracker pie crust were both mix-in options, I knew I had to do Waitress. I went with sweet cream instead of vanilla ice cream, because if I’ve learned anything from Jenna it’s that if you want to be a good baker sometimes you have to try something different.” 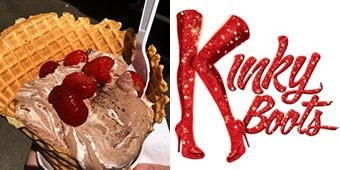 The Show: In a bid to save his father’s shoe factory, Charlie Price turns to a fabulously fashionable new friend—cabaret star Lola—who gives him an outrageous idea that could change both of their destinies.

The Ice Cream: “I figured if you’re making a dessert based on Kinky Boots, you’d better fully commit and go all the way. I started with the chocolate cake batter ganache ice cream, added in pieces of cheesecake and Heath bars, and topped it with whipped cream. It came out deliciously decadent, and I think Lola would be proud!”

The Show: Long before Dorothy arrived in Oz, two girls formed the unlikeliest of friendships… until the world decided to call one “good,” and the other one “wicked.”

The Ice Cream: “I knew I wanted to start with mint ice cream, because it had to be green. From there I added chocolate cookies and hot fudge. Then I saw the bright pink wafer cookies and I knew I had to include one. The mint chocolate ice cream mix and the strawberry cookie actually went together surprisingly well—just like Elphaba and Galinda in the show!” 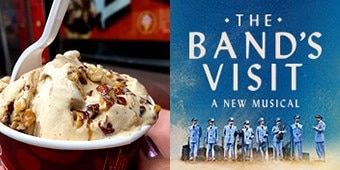 The Show: When a band of Egyptian musicians winds up in the wrong town for a night the locals take them, not expecting the way their lives will intertwine.

The Ice Cream: “The show is so beautiful and subtle; I wanted to make something to evoke that. I started with a coffee ice cream and mixed in caramel, almonds and cinnamon. It’s nice and delicate. The coffee and the cinnamon go so well together!”

Liz picked: Once On This Island 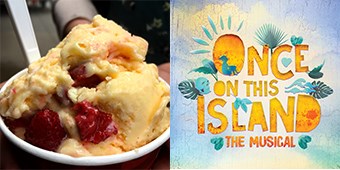 Mango Yogurt with Coconut and Strawberries

The Show: Once On This Island tells the universal tale of Ti Moune, a fearless peasant girl in search of her place in the world, and ready to risk it all for love.

The Ice Cream: “I wanted to make something tropical; the show is called Once On This Island after all! So I stuck with fruity flavors. Mango yogurt to start and then coconut and strawberries mixed in. It came out so refreshing—just what you want when it’s this hot out.” 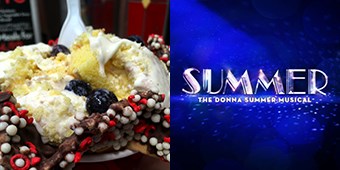 The Show: Summer: The Donna Summer Musical follows the life of music icon Donna Summer, featuring three powerhouse actresses as the singer in different stages of her career as well as some of her most enduring hits.

The Ice Cream: “When I saw the cake batter ice cream I knew I had to do an homage to Donna Summer’s hit song MacArthur Park. I mixed in yellow cake pieces and added blueberries because the Broadway production has used the color blue so beautifully. My only regret is that they didn’t have any edible glitter. But they had a waffle cone with sprinkles that reminded me of a disco ball, so I went with that and was quite pleased with it.” 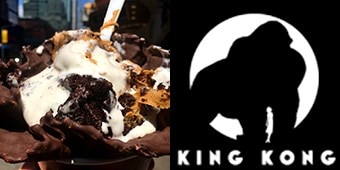 The Show: King Kong follows the ambitious young actress Ann Darrow and maverick filmmaker Carl Denham as they voyage from the bustling streets of 1930s New York to an uncharted island to capture the world’s greatest wonder.

The Ice Cream: “I started out with banana ice cream because I think that’s what King Kong would have wanted. From there, I mixed in peanut butter and chocolate brownies because a classic movie monster deserves a classic dessert. And of course I got the largest size, because Kong is a 20-foot-tall puppet in the show.”

What did you think of our creations? We’d love to see what you come up with for your favorite shows! Snap a pic of your Broadway frozen treat and share it with us on Facebook, Instagram or Twitter.