You’ve seen Al Roker on NBC’s TODAY, but now he’s getting ready to trade in early morning weather reports for evenings filled with pie. That’s because Roker is joining the Broadway cast of Waitress, from October 5 to November 11. We chatted with the TV (and now Broadway) personality on the eve of his first rehearsal, check it out below:

BI: What was it about Waitress that made you decide this was the show you wanted to make your debut in?
AR: They asked! You know, I once interviewed William Shatner, and he said his secret to success was always saying yes. So even though this wasn’t a lifelong dream of mine, I figured why not, and said yes.

BI: How have you been preparing for the role?
AR: I was surprised that I have a song in this role, and my wife said to me “What part of ‘Broadway Musical’ don’t you get?” So I’ve been working with vocal coach Deric Rosenblatt, and I really lucked out because he is simply one of the best in the business.

BI: Are there any similarities to what it takes to perform on Broadway and being on The Today Show?
AR: One of the things that Deric has said to me, and also rings true for The Today Show, is that I should just relax and have fun. That will be the biggest trick, to not overthink it and just enjoy myself.

BI: People might be surprised to see you’re in a musical. Have you always secretly been a singer and a dancer?
AR: No, not at all…not even close! Honestly, my plan was never even to be on TV. When I was at school at SUNY Oswego, my goal was to be a writer or a director. I ended up just falling into it by accident.

BI: How are you like your character Old Joe?
AR: We’re both old. 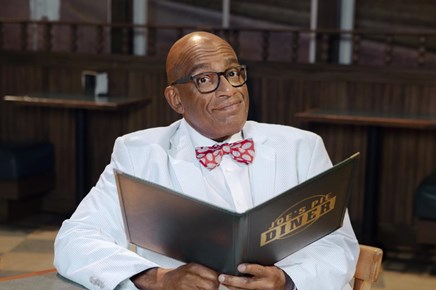 BI: Do you forecast more Broadway roles in your future?
AR: Ha-ha, I see what you did there! Let’s see how this goes first.

BI: There are so many shows out on Broadway, why is Waitress the one to see?
AR: It’s a feel-good show. You’re left feeling a little better than when you came in. Plus, you can get pie! And who doesn’t like pie?

BI: Do you bake at all?
AR: I’m a pretty good cook, but I’m not a particularly good baker. Much like my television job, I like to ad lib and you can do that when you cook, but you can’t do that when you bake. It’s like the difference between jazz and classical music. You can ad lib jazz, but you can’t do that in classical music.

BI: Any ice cream to go with it?
AR: Like Old Joe says, on the side and on its own plate.

A huge thank you to Al Roker for taking time out of what is going to be a very demanding schedule to talk to us. You’re not going to want to miss out on seeing him in Waitress, this is a strictly limited engagement. Click the show page below to get your tickets now to this feel-good musical.