SIX brings history to life. This sizzling musical is a modern retelling of the stories of six wives of Henry VIII. They got tired of being overshadowed by their husband's many affairs and brutal injustices towards women.

Catherine of Aragon, Anne Boleyn, Jane Seymour, Anna of Cleves, Katherine Howard, and Catherine Parr band together to perform a pop concert, inviting us to hear what they’ve really been through because of Henry. But the performance quickly turns into a “competition,” as they’re trying to decide on who was mistreated the most. However, after each one has her say, they notice one bitter, disappointing fact - all this time, their personalities were erased, and their places in history were defined by a man. They quickly realize that they should stop competing and instead raise their voices in unison to help one another reimagine and rewrite their lives as if Henry has never crossed their paths.

The show gives powerful voices to the women whose perspectives we seldom hear on history lessons. They sing their hearts out about all the love, loss, and betrayal they had to live through.
SIX is an empowering retelling of the story of these strong women, filled with moving music and dance, and it is sure to leave audiences feeling inspired.
Despite the challenges, the ladies ultimately find strength in each other and use music to build a better (imaginative) future.

Book, music and lyrics are by Toby Marlow and Lucy Moss. This NYC production is directed by Lucy Moss and Jamie Armitage.

Are discount group rates available for SIX the musical on Broadway?

Yes, group tickets for SIX the musical on Broadway can be purchased through our website. Broadway Inbound is an official seller of group tickets for Broadway shows. Your transaction is secure, and you will receive your tickets in plenty of time for the show.

What is the minimum amount of tickets needed to qualify for group rates?

Discount group pricing for SIX on Broadway starts at 10 tickets.

SIX is the perfect choice for groups! From the explosive opening number to the thrilling finale, this heart-pounding musical will leave everyone breathless. With its moving story and catchy songs, SIX is sure to entertain and engage audiences of all ages. So gather your friends and family and head to Broadway for an experience you’ll never forget.

Where is SIX the musical playing on Broadway?

The best way to get to SIX the musical on Broadway is to take the subway. The N, R, and W trains are located on 49th street.

Where can I see a seat map for the Brooks Atkinson Theater?

View the seating chart for the Brooks Atkinson Theatre 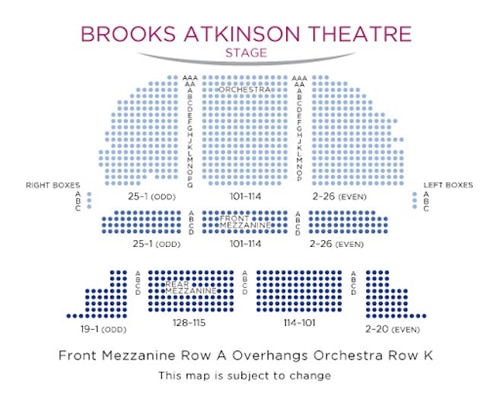 What is the running time of SIX the musical on Broadway?

SIX is an 80-minute show, with no intermission.

Is SIX on Broadway kid-friendly?

The show is recommended for ages 10+. Please note children under the age of 4 are not permitted at the theatre.

Is proof of vaccination required for SIX on Broadway?

VACCINATIONS NOT REQUIRED: Proof of vaccination or negative test are no longer required to enter the theatre. All audience members must wear a mask at all times inside the theatre, except when eating or drinking in designated areas.

Am I required to wear a mask during the show?

MASKS ARE REQUIRED: All guests must wear a properly fitting mask over the nose and mouth in the theatre except when eating or drinking in designated areas. Broadway’s COVID-19 Safety Policies.

What is the dress code for SIX the musical on Broadway?

There is no strict dress code for SIX on Broadway, but smart casual attire is a good choice.

What is the best time to arrive at the theater?

Typically we recommend guests arrive at the theatre at least  30 minutes before the show starts. This will give you enough time to find your seats and get settled in before the performance begins. Currently this theatre suggests arrival times that are dependent on where you are seated.  you may want to check with us for more guidance

There’s no place like Broadway in the whole world. From the latest and greatest musicals to timeless classics, Broadway has something for everyone. If you’re looking for a night out on the town, see a Broadway show in New York City. With world-class productions, you’ll be sure to have a night you’ll never forget. Broadway is a one-of-a-kind experience that you can't really find anywhere else. There's nothing like taking in a show in the heart of Times Square. The shows are amazing, and the city itself is just electric. You're surrounded by towering skyscrapers and the bright, flashing lights of Broadway. It's a total sensory overload, but you can't take your eyes off of it, and it is an experience everyone should have at least once. Take a look at some of the most amazing Broadway shows and book your tickets today.