Come From Away FAQs

Come From Away is a Tony Award®-winning musical that tells the remarkable true story of the people of the Canadian town of Gander, Newfoundand, who welcomed thousands of airplane passengers into their homes on 9/11. When commercial flights were redirected to their remote island, the locals opened their homes and hearts to the stranded travelers, and the little town became a beacon of hope and tolerance.

A testament of the human spirit, Come From Away celebrates the best of humanity and the power of connection. The show has been praised by critics and audiences alike and has quickly become one of the most impactful musicals in Broadway’s history. Come From Away is a song-filled, story-driven celebration of the bonds that are created when we’re in need.

Don’t miss your chance to see this acclaimed production on Broadway!

What makes Come From Away special?

If you're looking for an outstanding Broadway experience, then you shouldn't miss Come From Away. What makes the musical so exceptional is that it is a story about real people and real events that happened on 9/11. The music and story blend seamlessly, with book, music, and lyrics by the husband and wife team of  Irene Sankoff and David Hein.

Are group tickets available for Come From Away musical on Broadway?

Yes, group tickets are available for Come From Away.

Seeing this powerful story in a group and sharing your experience with others is truly unique. It’s a show that will leave you thinking and talking about it for days after.

For more information and to purchase group tickets, please visit the Come From Away show page.

What is the number of tickets needed to qualify for group tickets?

The minimum number of tickets needed for discounted group pricing is 10.

What is the running time of Come From Away on Broadway?

The running time for Come From Away is 100 minutes with no intermission.

What is the plot of Come From Away?

When 38 planes with 7,000 passengers from all over the world are rerouted to Gander, Newfoundland during the 9/11 terrorist attacks, the town's population doubles overnight. The locals take in the weary travelers, sharing what little they have and offering a warm embrace to people who are suddenly far from home. As the days unfold, a unique bond is formed between the townspeople and the visitors, one that celebrates the best of humanity and underscores the importance of community.

Is the musical Come From Away kid-friendly?

The show is recommended for ages 10+. Children under the age of 4 are not permitted in the theatre.

Where is Come From Away playing on Broadway?

Come From Away is playing at the Gerald Schoenfeld Theatre, located at 236 West 45th Street
New York, NY 10036.

What is the seating capacity in Gerald Schoenfeld Theatre?

The capacity at the Gerald Schoenfeld Theatre is 1,080. 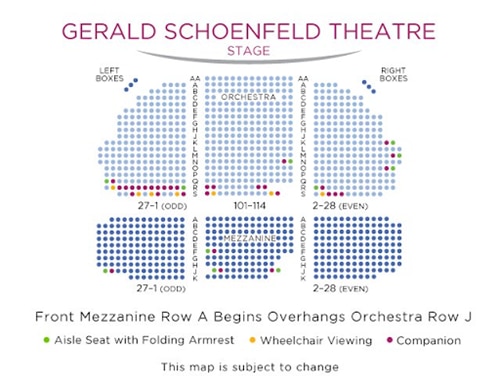 Is proof of vaccination required for Come From Away?

VACCINATIONS NOT REQUIRED: Proof of vaccination or negative test are not required to enter the theatre.
Broadway’s COVID-19 Safety Policies.

Are masks required during the show?

MASKS OPTIONAL: All guests are strongly encouraged to wear a mask in the theatre to protect themselves and others, but it is no longer required.

What is the dress code for Come From Away musical on Broadway?

There is no dress code for the show. Smart casual clothing is a good choice.

What time is it best to arrive at the theatre?

It is best to arrive at the theatre at least 30 minutes before the show begins.

When you see a Broadway show, you’re experiencing some of the best talents in the world. From the moment the curtain goes up, you’re immersed in a live theatrical experience at its highest level. And when it’s all over, you are left with the memory of an experience that you will never forget.