View All Shows
This show played its final performance on Sunday - January 15.

Mike Birbiglia brings his coming-of-middle-age story, The Old Man & The Pool,  to Broadway this fall, and Variety says "you'll never want him to shut up!"

Award-winning comedian and storyteller Mike Birbiglia returns to Broadway this fall with a tale of life, death, and a highly chlorinated YMCA pool. Birbiglia takes the stage at the esteemed Vivian Beaumont Theater at Lincoln Center to chronicle his coming-of-middle-age story that asks the big questions: Why are we here? What’s next? What happens when the items at the doctor’s office that you thought were decorative become functional? The Old Man and the Pool, which played to sold-out houses in Berkeley, Chicago, and Los Angeles, resonates with audiences ages 12 to 112. It’s a hilarious reminder for all of us recovering from failing bodies and a flailing world that laughter is indeed the best medicine.

“Grade A! The artful storyteller Mike Birbiglia is Excellent at his craft, and in The Old Man and the Pool, the comedian is at the top of his game. I felt connected to him. Hilarious observations unfold into tales that are charming and gripping. You never feel like he’s performing a bit, but rather like you’re throwing back a beer with your funniest friend.” - Entertainment Weekly

“The core of Mike Birbiglia’s charm is, he’s favorite-pair-of-jeans comfortable, and remarkably skilled at finding profundity in subjects well within arm’s reach. The Old Man and the Pool feels like catching up with an old friend – you never want him to shut up.” – Variety

“A galvanic, endearing and very funny meditation on mortality...Old Man marks an evolution point for Birbiglia’s comedic style – the show deftly uses comedy as a deep dive, demonstrating that when you stop thrashing around and exist in the moment – you float.” - ChicagoSun Times

Recommended for ages 12 +
Children under the age of 5 are not permitted in the theatre. 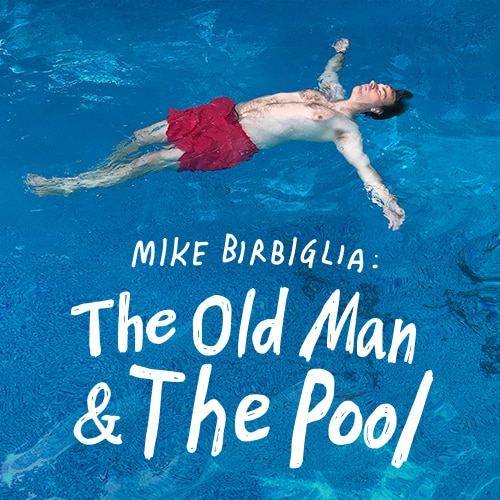