No need to adjust your monitor: in new photographs from Broadway World, it looks like things are getting a little topsy-turvy at the Lyceum Theatre. The theatre, which is home to the new play The Play That Goes Wrong, has hung their marquee upside down. In further indication of the high jinks to come, the production released a new behind-the-scenes video featuring the cast.

The Play That Goes Wrong is fresh off its Olivier Award-winning run in London, where it earned rave reviews, including this one from Ben Brantley of The New York Times: "A gut-busting hit! I roared, and honestly, that had nothing to do with the fact that at intermission, the actor playing the leading role handed me an envelope with my name on it. Inside was a five-dollar bill, with a little note attached. It was labeled with a single word: 'Bribe.'"

In the new video, Broadway audiences get a taste of how the cast is preparing the show's American debut. It's a video teaser for The Play That Goes Wrong that ... goes wrong. Based on their marketing alone, Broadway audiences are in for side-splitting laughter. Watch the video and then check out these images from the Lyceum Theatre's hilarious marquee and stage door, courtesy of Broadway World's Walter McBride. 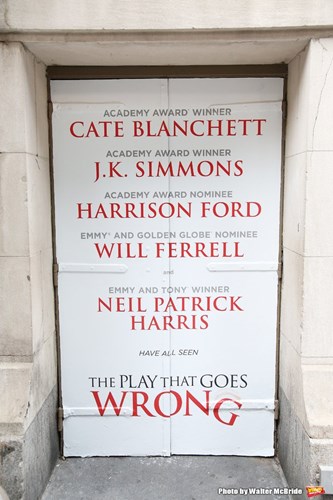