Each and every group is unique. Whether you're heading out on the town with your friends or doing a little team building with your co-workers, each group has its own specific wants and needs when it comes to picking the perfect Broadway show. Fortunately, no one knows Broadway better than our staff at Broadway Inbound. We're lucky enough to see almost every show that opens on Broadway, which makes every staff member on our team a bona fide theatre expert.

There's nothing we love more than talking about our favorite shows, so we've assembled a list of some of our current Staff Picks. Below, you'll find more shows that our international reps loved on their recent visit to New York!


Lydia’s Pick: The Phantom Of The Opera 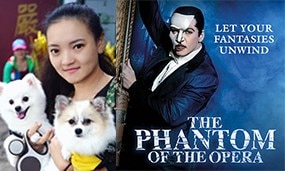 Lydia Recommends: The Phantom of the Opera is a classic musical filled with songs to touch the heart. It’s the first Broadway show I have seen and the songs [were stuck in my head] for a long time. It’s a very different experience to see it at the theater; I had watched it on TV before, but now I can tell why it’s become the longest-running show on Broadway!

Perfect For: Young people and those interested in classical music. Additionally, it is perfect for the elder Chinese traveler who has seen the movie!

Phantom Of The Opera in Three Words: Classic. Heart-warming. Memorable.

Meet Lydia: Lydia is a Broadway Inbound representative from China. Not only was this Lydia’s first Broadway show—it was her first time in New York as well! “I come from Shanghai, China. Everything in NYC is interesting to me! I like the architecture of the city, the art and culture, and the nice people I have met!”

To purchase group tickets for The Phantom Of The Opera, click here. 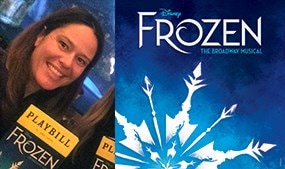 Jessica Recommends: Anyone planning to travel to NYC should not miss this new Broadway hit – Disney’s Frozen! It’s simply magical! An amazing Disney musical which doesn’t disappoint to bring everything on stage that you expect from Disney – spectacle, wonderful music, great dancing, an impressive stage setting, some breathtaking special effects, a touching story, and simply the overall Disney magic that will remain with you even after you leave the theatre. A fairy tale for everyone to enjoy when visiting NYC!

Perfect For: Pretty much every kind of audience. And it is especially suitable for international visitors because the story is well known and the show itself simply impresses with all its magic without any language barriers, and it offers everything what an audience expects of a Broadway musical!

Meet Jessica: Jessica represents Broadway Inbound in Germany, but she’s been to Broadway many times ever since seeing Miss Saigon in 1997. She loves “the magic of indulging in another world for a few hours, and simply being captivated by great dancing and great music!” 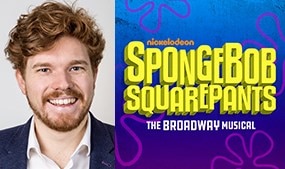 Tom Recommends: SpongeBob SquarePants. It’s one of the most imaginative, creative, bright and transporting shows I’ve ever been to! It’s so colourful and fun and you can’t help but love the characters and have a great time. The songs are catchy and Squidward’s tap number (with 4 legs and 4 tap shoes to match them) is worth the ticket price alone. Sadly, it’s closing on September 16, so everyone should try to see it before then.

Perfect For: It’s perfect for everyone! It’s a brilliant show for children and families, for teenagers and people in their 20s that grew up with SpongeBob and everyone else that wants to see a show where you can’t walk out without a beaming smile on your face!

Meet Tom: Tom is one of Broadway Inbound’s London reps. One of his favorite things about New York is the scale and scope of the city; “the amount of skyscrapers in one block is probably near the same amount as in the whole of London. I also love the diversity of the city and how there is such a mix of food, culture and amazing things to do.”

Time is running out to see SpongeBob Squarepants before it closes this September! To purchase group tickets, click here.