No one knows Broadway better than our staff at Broadway Inbound; we’re lucky enough to see almost every show that opens on Broadway. But no matter how much you love Broadway, you can only spend so much time listening to show scores. That’s why we asked some of our staff members to create playlists inspired by the shows playing on Broadway right now.

Whether it’s a pop-y remix, or a live cover, these playlists are Broadway songs like you’ve never heard them before. Except for when it’s the original cast recording. But we had to include a few of those. We’re Broadway Inbound; what did you expect?


Todd has worked on Broadway for 20 years and has amassed a huge Playbill collection that fills a good part of a closet in his house. He loves serious musicals that elicit emotion, like the haunting use of Bob Dylan’s music in Girl From the North Country, but he’ll never say no to a big huge dance number. 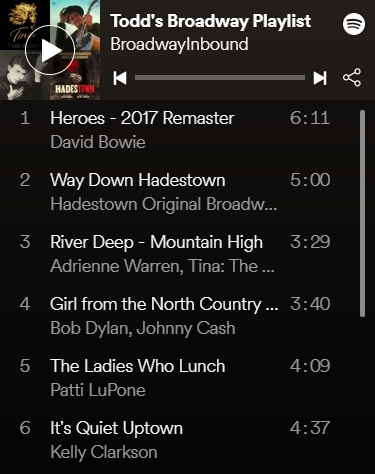 Kevin's Broadway Playlist
Kevin has been a die-hard musical lover since birth, so it makes sense that his playlist is full of Broadway deep cuts (a song cut from Wicked, anyone?) and musical theatre numbers covered by the stars of the New York stage! 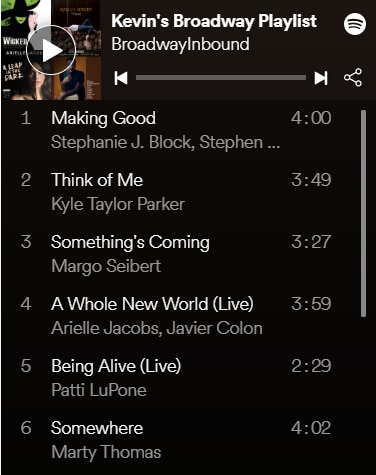 Christine's Broadway Playlist
Broadway scores were the soundtrack to Christine's childhood. Now, she appreciates a good cover or an acoustic original—especially Anaïs Mitchell's early recordings of what would become Hadestown. 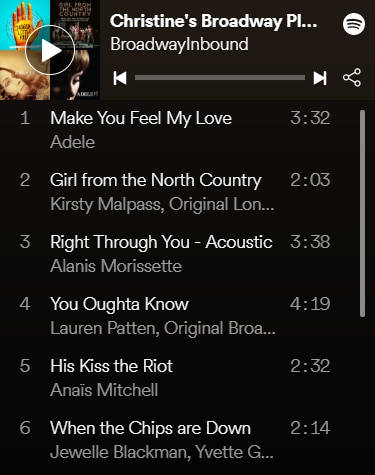