It’s a sunny Saturday morning, and the students of Utah’s Hillcrest High School are hard at work in a Broadway rehearsal room, warming up for their marathon morning of theatre workshops.

This group has created a custom set of workshops with Broadway Inbound, beginning with an acting class and ending with a Meet the Artist Q&A. Dozens of hands shoot into the air when their instructor asks for a pair of volunteers. Two students step forward, and she has them sit in a pair of metal folding chairs. They smile with bravado, ready to show off.

Their instructor is Angela Pierce, who was recently among the cast of the Tony Award®-winning Best Play, Oslo. “We’re going to do a cold reading,” she says while passing out scripts to the students. “It’s when you perform a scene that you haven’t worked on in advance. If you’re planning on being a working actor, it’s a skill you’ll need to perfect.”

The pair of teenagers begin to read the scene, but after one of the actors stumbles over a word, it’s clear that his confidence falters. He spends the rest of the scene reading tentatively and looking down at his script.

Seeing this, Pierce doesn’t miss a beat. She walks up and takes him gently by the shoulders. “You’re a little nervous, right?” she asks, and he nods. “Tension is normal, but it’s not useful.” She has him take several deep breaths while he tenses and releases his muscles. When they read the scene again, there’s a newfound sense of relaxation that allows both actors to become truly present. The scene crackles with a fresh energy.

When it’s over, the class talks about what they saw. “This may sound overly simplistic,” Pierce says, “But you are all very interesting, and you are enough. When you’re on stage, you don’t have to do anything other than just be.”

“That’s fabulous advice,” a voice says from the back of the room. The students all turn to see Reed Birney, the Broadway veteran and Tony-winning star of The Humans. A noticeable chill spreads through the room as the students realize who it is. The night before, they had seen him star as the terrifying O’Brien in 1984, a character who spends much of his time on stage administering particularly heinous torture methods to the protagonist. 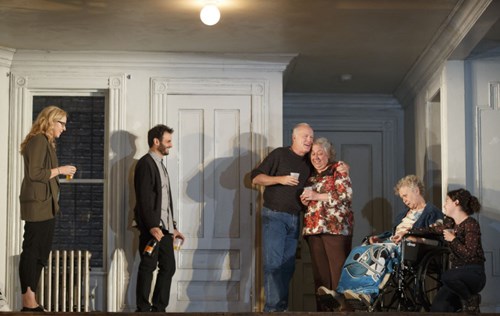 Birney (center) with the cast of The Humans. Photograph by Joan Marcus.

Birney seems to notice their silent trepidation, and he quickly sets them at ease with his warm laugh. “I’m here to answer any questions you might have about the life of an actor,” he says, and thirty hands fly into the air. Birney calls on a particularly enthusiastic student, who asks, “How do you create your characters?”

“Acting is just really good pretending,” Birney says. The students laugh. “I’m serious! It’s the same thing we did in our sandboxes when we were five. It’s as simple and as hard as that.”

The student isn’t totally satisfied. “But how do you do that?” she asks.

Birney thinks for a moment before saying, “When we’re in kindergarten, we’re all really good at pretending. We’re open for anything. But as we grow up, we start getting hurt, and we develop armor. Our job on stage is to remove that — to get back to that freedom we had in our sandbox.”

Another student asks, “Is there anything you wish you had known when you were our age?”

“Are you calling me old?” Birney performs mock offense before answering: “I wish I had known how to avoid feeling sorry for myself. I spent 35 years being depressed about my career because it wasn’t moving fast enough, and I lost a lot of my life to being sad.”

It’s a surprisingly candid answer, and not the one that anyone seemed to be expecting. Most of these students are just 15- or 16-year-olds, but Birney, 63, is talking to them like they’re his peers. He’s saying things that other adults in their lives might be hesitant to say, which makes it even more valuable.

“As far as anyone in Hollywood or on Broadway is concerned, they don’t need another actor,” Birney says. “It’s your job to make a need for yourself. When you go into an audition, you need to be so fully yourself that they can’t imagine the part being played by anyone else.”

Later in the class, Birney asks, “How many of you want to be professional actors?” Most of the hands in the room go up. “At some point, you’ll need to get honest and ask yourself if you’re a ‘lifer.’ Do you have a backup plan, or is this the only thing that you want to do? Whatever you answer is okay, but committing to the life of an actor has a lot of implications.”

Birney’s voice grows somber as he continues, “When you go back to your ten-year high school reunion, you’re going to realize that your classmates will have things that you won’t. Your life will look different from theirs. They’ll have houses and kids and 401ks, and you might still be bartending and living with roommates. Accepting the life of an actor means that your life will be different from everyone else that you know.”

There’s a long pause, and many of the students (and chaperones) shift around in their seats. Is this what they had come for, to be talked out of following their dreams? Then Birney, after taking a long drink from his iced coffee, looks back up at the students and continues: “But, by being an actor, you’ll know things about being alive that your classmates won’t. You will spend your life examining the human condition in a way that civilians won’t. As painful as it sometimes is to be an actor, I wouldn’t change it for the world.”

After the Q&A officially ends and the students have left, I ask Birney what he thinks is valuable about the workshop experience.

“When I was around their age, an actor came into our class and talked to us. It was a revelation. I had no idea you could make a living as a professional actor, but hearing him talk made me realize that it could be done. What’s more thrilling than the possibility of giving that kind of a moment to one of these kids?”

There’s no better way to enrich your Broadway experience than with a customized workshop. With Broadway Inbound’s wide variety of classes, ranging from dance to voice to audition technique and beyond, there’s a perfect workshop for every type of group. You can see the variety of workshops that Broadway Inbound offers and book your own experience by visiting our workshop page.