School of Rock, the hit musical from Andrew Lloyd Webber, features Broadway’s first-ever kids rock band playing their instruments live on stage. These kids are incredibly talented and hard-working, but we wanted to know what the young stars like to do around New York City when they’re not busy jamming out. Rachel Katzke, Ellie Kim, Raghav Mehrotra, Jason Kisare, Chloé Bryan, Ava Della Pietra, Ruth Righi, and Gianna Harris shared the places they love the most, and they hope visitors will love them just as much.

It’s no surprise that music and dance are common interests among the cast. Raghav enjoys shopping at Sam Ash (333 West 34th Street), “because they have an awesome eclectic collection of instruments,” while Jason, Chloé, and Gianna like trying out the instruments at Guitar Center (218 West 44th Street). You can find Ruth and Ellie at Broadway Dance Center (322 West 45th Street) enjoying drop in classes like Sheila Barker’s Jazz and David Thomas’ Hip-hop.

Museums are a must for the cast as well. The dinosaur hall and Arthur Ross Terrace at the American Museum of Natural History (Central Park West and 79th Street) holds fond memories for Rachel, as well as the shop at the Museum of Modern Art (11 West 53rd Street), which she says she can spend hours exploring. She says that her character, Katie, would also enjoy the Museum of Modern Art “because they have a great kids audio guide and tons of famous paintings by artists she probably learned about at Horace Green.”

For these seasoned NYC kids, there’s so much more to the city’s food than just pizza and bagels. Elli loves to go to BCD Tofu House in Koreatown (5 West 32nd Street) for their Korean BBQ short ribs; then she heads right next door to Pinkberry for some frozen yogurt for dessert. To satisfy her sweet tooth, Rachel goes to Schmackary’s Cookies (362 West 45th Street) to get her favorite Funfetti Cookie. Sticking to her musical interests, Ava likes eating at VYNL (756 Ninth Avenue), where the menus are old album covers and the bathrooms are dedicated to Beyoncé and Michael Jackson.

All of the cast agrees that half the fun is just getting out and exploring the different neighborhoods that make up New York City. Whether you’re visiting or a seasoned New Yorker, plan an outing you won’t soon forget by visiting some of these destinations. And don’t miss School of Rock at the Winter Garden Theatre. Book your tickets in advance by visiting the show page below and get ready to rock to this high-octane smash. 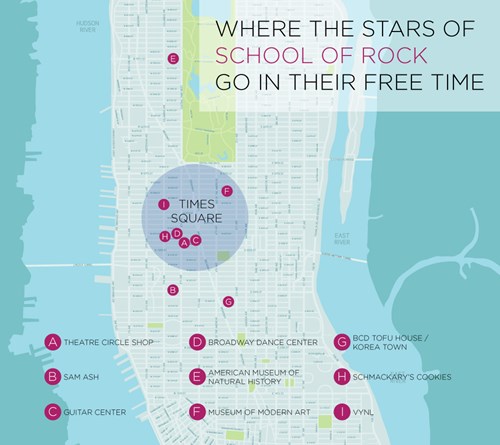