On Wednesday evening, Broadway Inbound staff and clients gathered at the iconic Planet Hollywood in Times Square to toast the huge success of this season’s smash-hit, Pretty Woman: The Musical. And considering the opening number of the show is called “Welcome to Hollywood,” it was the perfect place for a party.

Over cocktails and delicious snacks, everyone gabbed about the show and the incredible response it’s getting from groups and travelers to NYC. The clients at the pre-theatre event were also invited to see the show for themselves that night—and couldn’t contain their excitement.

And who wouldn’t be excited? After all, Pretty Woman is one of the most famous and iconic romantic comedies of all time, to paraphrase lead producer Paula Wagner, who spoke at the event. Wagner went on to talk about the top-notch cast, including leading duo Samantha Barks and Andy Karl, and the creative team, which includes legendary songwriters Bryan Adams and Jim Vallance. 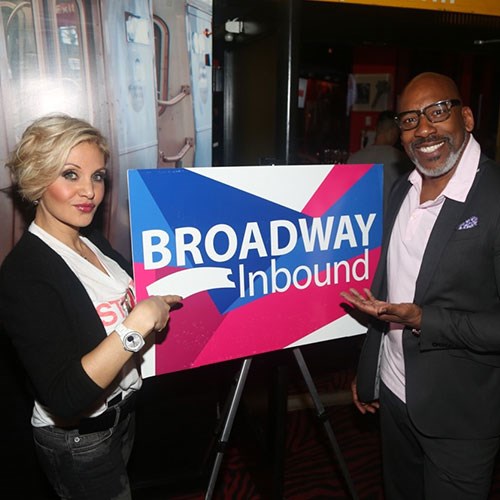 Also joining the party were stars Orfeh, who plays brassy sidekick Kitt, and Ezra Knight, who plays the delightful Mr. Moore in the show. The two chatted and mingled, took photos, and encouraged people to tell everyone to come see the new musical.

At 7:15, the two actors had to book it to the Nederlander Theatre to get ready for the show, and soon after, the rest of the party headed over to take their seats and get ready for Pretty Woman the Musical.

Pretty Woman: The Musical is currently one of the most popular shows on Broadway Inbound, so book now by visiting the show page below.