Earlier this month, staff members from Broadway Inbound set out for Chicago to host clients and friends at the pre-Broadway run of Pretty Woman: The Musical, the new stage adaptation of the beloved film. After months of anticipation, our team was invited to visit the Oriental Theatre and bring along our top Chicago-area clients; we were thrilled!

The Broadway Inbound team put together a fabulous cocktail event before the performance at the gorgeous Phoenix Lounge at the Wit Hotel and hosted 50 attendees from nine different area tourism companies. Once the crowd had settled in over a tasty assortment of food and cocktails, lead producer Paula Wagner joined us to talk about what made the film so special and what drew her to the project.

She told us that she had always loved the film, but was equally drawn to the project because the music was composed by Grammy® winning Canadian superstar, Bryan Adams. His brilliant original score combined with the empowering and endearing story of unlikely soulmates who overcome all odds to find one another leaves audiences smiling and dancing their way out of the theatre! With that introduction on our minds, we headed in to the show to find out just how right she was. Believe us when we say that we did indeed dance our way out!

The show features excellent lead performances by Tony® winner Steve Kazee (Once) as Edward Lewis and marvelous Broadway newcomer Samantha Barks as the iconic Vivian Ward. We are dazzled with the funky costume stylings of the late 80s as we ping pong between the worlds of the two characters; from seedy Hollywood Boulevard to ritzy Beverly Hills, featuring the shops of Rodeo Drive and even a polo ground! Also, Vivian’s spectacular red dress makes an appearance that you’ll not want to miss. One fun new element of the show is that the actor playing a prominent supporting character also holds several smaller roles, always popping up where you least expect him; keep your eyes peeled! 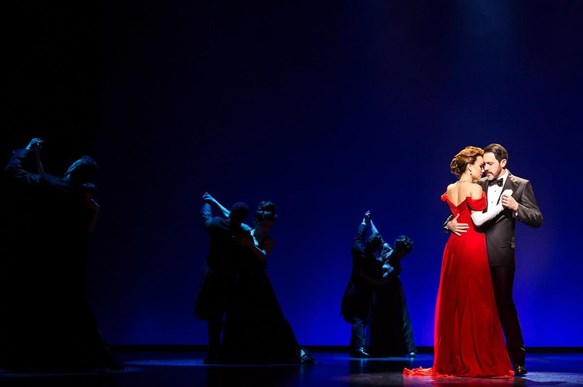 Performances in New York begin on July 20th, 2018 at The Nederlander Theatre; tickets are on sale now!