In the midst of the joyful chaos that is load-in, the creative team behind King Kong, opening at the Broadway Theatre next month, invited us to see something very special.

And very big.
The theatrical reimagining of this familiar modern myth stars a 20-foot-tall, 2,000 pound gorilla. And we got to meet him.
This is pre-magic-time. Before the lights are all hung and the audience files in, when the lobby is full of boxes and the theatre is full of scattered script pages and other debris. This is the part that you aren’t supposed to see.
We were ushered through the lobby and up the stairs into the mezzanine. Drew McOnie, the director of the production, welcomed us and told us a little about what we were about to see: a scene in which Ann Darrow sings Kong to sleep. Then he stepped aside and the theater darkened.
When the stage lights came up there were audible gasps. I’ve been ravenously consuming everything I’ve been able to find about Kong for months now and even I was taken a back. He’s huge, yes. But he’s also so alive.
You know that he’s a puppet. You know it. You can see the wires supporting his weight, the puppeteers manipulating his limbs. You know that it’s not real. But his brow hardens and softens and his eyes glint like water and what is real anyway? Isn’t that just what theatre’s so good at? Making us forget? 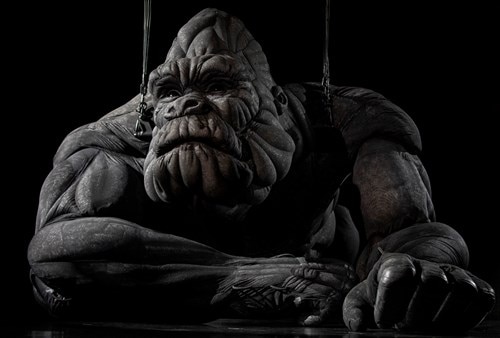 It is a lovely lullaby, supported by dreamy scenic design and sung by the even dreamier Christiani Pitts. When Kong awakens to find Ann gone and races down the mountain in search of her, it’s either stunning storytelling or an incredibly deft and detailed display of athleticism, depending on whether you’re watching Kong or the cohort of performers steering him.
Once the scene ended, producer Carmen Pavlovic came out to introduce us to the team of puppeteers that are responsible for all of Kong’s movements, even the seemingly simple ones.
It takes fourteen people to bring Kong to life – one of whom works double time, providing all of the gorilla’s vocalizations live. The impossible synchronicity of their work is what creates our experience of Kong as a singular, emotive character.
I didn’t want to leave the theatre. I lingered as the people around me spoke and filed out, watching as the technicians got back to work. Soaking in a feeling I haven’t felt since I was much smaller and the world seemed much newer: Wonder.
See King Kong for yourself starting October 5th at the Broadway Theatre.
Author: Christine Nyland