You can read our experiences with the cast here and here, but this time we were lucky enough to chat with the show’s stage manager, Matthew DiCarlo, about what his job entails and what makes the show such a hit. 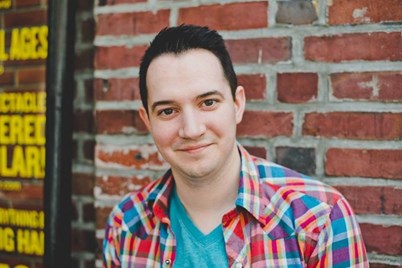 BI: What is it like making sure things “go wrong” on purpose? It’s a very physical show, has there been a time when something didn’t go wrong when it should have? How do you deal with that behind the scenes?
Matthew DiCarlo: It is a lot of fun making things “go wrong”! There was a bit of a learning curve at first because making things go wrong on purpose is the opposite of what I am wired to do. But it is completely exciting. The timing is so intricate and precise. Often, the cues we call get laughs! Since the set is basically a character in the show, it is so rewarding to be a big part of making that character come to life. We have certainly had our moments where things that were supposed to go wrong…went wrong. We have a Plan B (and sometimes, a Plan C & D, too!) for when things fail. Often, the play just goes right for a moment while we get back on track.

BI: As a stage manager, what does your job entail? What does your day look like? What advice would you give to someone looking to get into the same field?
MD: The job entails so many things and that is why I love it! I believe that the job of the Production Stage Manager on a Broadway show is equal parts organizational, technical, and artistic. You are a manager in every sense of that word. The day-to-day duties include putting together and maintaining schedules and paperwork, calling the show, making sure the performances runs smoothly and safely, sending out performance reports, etc. I’m also responsible for maintaining the artistic integrity of the show and being the director and producers’ eyes and ears when they are no longer at the theatre every day.

Stage Managers get to interact often with everyone who works on the show — both in the building and not in the building. Even after a year at The Play That Goes Wrong, the job has never felt the same two days in a row! If you want to get into stage management, I encourage you to learn as much about every aspect of theatre as possible! Meet people. Talk to stage managers about stage managing. Always treat people with the same respect you hope to get back. And smile.

BI: There’s a character in the show, Trevor, who plays the sound and lighting operator. With you doing the heavy lifting, so to speak, backstage, how do you two coordinate?
MD: Akron Watson, who plays Trevor, is amazing! He knows the sound and lighting cues so, so well. Although he is wearing a headset, he can’t actually hear me. Yet he masterfully presses buttons at his (fake) console at the moment before the cues are executed, just like the actual operators who are running the show.

BI: What was it like bringing the show from the West End to Broadway? How much time did you spend over in London, and what would you say were some of the noticeable differences between the West End and Broadway productions?
MD: It was such a thrill to bring this show over from the West End and to work with Mischief Theatre. Last year, I went to London for about two-and-a-half weeks to learn the show and meet the original company, who also created the show. The show is very similar to the production on the West End. There are a few lines and references that shifted a bit to make the show a bit easier on the American ear, but other than that, it is so similar. Each cast that performs the show brings such a unique approach to the characters, but the bones of the piece are the same.

The biggest difference between our show and the West End production is the way the machinery of our set functions! My brilliant colleague, Sharika Niles, and I spent a lot of our time over there figuring out how to translate what was happening behind the scenes at the Duchess Theatre into something that would work for us here in NYC. We are so blessed to have an amazing crew at the Lyceum Theatre who keep the mayhem running smoothly and safely! 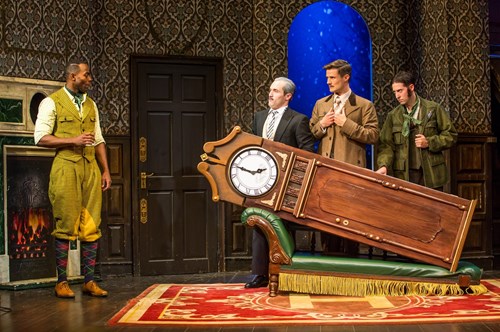 BI: When it comes to seeing a Broadway show, visitors to NYC have so many choices, and we hope they will choose to see everything, but if they can only choose one, why is The Play That Goes Wrong the one to see?
MD: The Play That Goes Wrong is the funniest show out there. Kids love it, adults love it, everyone loves it. It STILL makes me laugh out loud — and I watch it eight times a week! There is no better way to spend an afternoon or evening than laughing for two hours straight. Come see us!

BI: Being from New Jersey, how often would you go into NYC growing up? When did you decide to move here? What was it that made you want to work on Broadway specifically?
MD: I came into NYC quite often! I have such vivid memories of my dad bringing me to see Broadway shows as a kid, and I even decided to go to Rutgers to get my BFA because of its close proximity to the city. I moved here as soon as I graduated college and have been here almost 11 years. I could never imagine doing anything else besides working on Broadway. Live theatre was all I ever wanted to do. It consumed me as a kid (and it consumes me now!). I love it. And I knew that New York City was where I needed to be.

BI: Speaking of NYC, we get countless travelers who come to see a Broadway show but are also looking for other experiences to round out their trip. What are some of your favorite destinations around town? Where would you recommend someone go to eat, shop, play, etc.?
MD: This city is so amazing! Go to a museum. My favorite is MoMA. Visit Lincoln Center. Take a walk in Central Park (or rent a bike!). Definitely get a cookie at Schmackary’s. Get a post-show cocktail at Bond 45 or Glass House Tavern. Another one of my favorite restaurants in Hell’s Kitchen is Southern Hospitality.

BI: If you have the time, are there any other Broadway shows you’re planning on seeing? Which ones and why?
MD: I can’t wait to go back to Once On This Island for a second viewing. I was lucky enough to be there for opening night, and I was captivated, heart-broken, uplifted and so, so satisfied. It’s beautiful. I also really want to see The Band’s Visit, I hear such wonderful things. And I am absolutely going to find 8 hours so that I can see both parts of Angels in America. I’ve never seen it live…AND I MUST!


A big thank you to Matthew for taking the time to talk to us! If you want to take part in the mischief going on nightly at the Lyceum Theatre, get your tickets to see The Play That Goes Wrong by visiting the show page below.

TAGS: THE PLAY THAT GOES WRONG