Katharine McPhee has an impressive resume. She was first runner up on American Idol in 2006, starred in the inside-Broadway musical TV series Smash, can be found Monday nights on CBS’s Scorpion, and has released five studio albums.

While McPhee has worked with a plethora of Tony Award® winners and nominees including Bernadette Peters, Christian Borle, and Leslie Odom Jr., she has never starred on Broadway.

Starting April 10, McPhee will take the stage at the Brooks Atkinson Theatre as pie maker extraordinaire Jenna in Waitress. With her upcoming Broadway debut quickly approaching, we were thrilled to be able to chat with McPhee about preparing for the role, New York City, and what the musical means to her.


Broadway Inbound: Congratulations on joining Waitress! Can you share with us what the process was like for joining the show?
Katharine McPhee: About a year ago, the show called my manager and asked if I had any interest in the show. I’m a huge Sara Bareilles fan, so I immediately downloaded all the music and became obsessed. They were just feeling out my interest, so I eventually forgot about the idea till they came back to me this past December and asked me to play the part of Jenna! I happened to be coming to New York City anyway and got to meet Sara, the whole thing has been so amazing. I’m so excited about the role, I’ve had no restraint telling people around me what’s been going on!

BI: I’m sure your schedule is really busy between Scorpion and preparing for Waitress. What do you like to do in your time off?
KM: I typically like doing things that make me feel like I’m taking care of myself, like going to Barry’s Bootcamp and grabbing coffee after the work out. I like to stay on top of work stuff, so even after shooting Scorpion I’d go home and at 6 PM rehearse a bunch of stuff for Waitress. I love going out to dinner with friends, going on hikes and being with my dog. I’m actually on my way to meet my mom for lunch right now!

BI: What do you think the differences will be in performing on Broadway versus performing in a TV show?
KM: I’ve learned a lot about Broadway from Smash, but I’ve never been on Broadway. I imagine the amount of energy you exert on a Broadway show is probably very demanding, but fulfilling. I’m really not quite sure since I’ve never done it before. TV is very grueling and I’m sure it’s going to be the same in the beginning until I find my footing on the show, but I wonder if after that initial period I’ll find this to be a little refreshing in terms of time I’ll have to take care of myself.

BI: Speaking of taking care of yourself, how do you take care of your voice?
KM: I was sick a while back and there is nothing you can do about it but wait till it gets better. I’m very conscious of how much talking I do and how many loud environments I’m in. I’m taking this role very seriously and I want to be the best I can be. My voice teacher is giving me a full vitamin regimen that I normally don’t follow every day, and getting lots of sleep and exercise is important for me too. 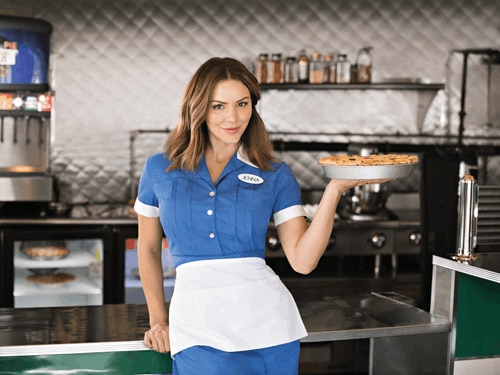 BI: You’ll be living here while you’re in Waitress, but have you ever lived in New York City before?
KM: I lived here for two years while doing Smash and can honestly say it is my preferred city to live in! I fell in love with this city and would move back here in a heartbeat. I have always loved where I came from but I feel so connected to New York City. When I’m here, I feel like the best version of myself. I just feel so free and alive here!

BI: Since you’re no stranger to The Big Apple, what would you recommend visitors to this great city check out?
KM: I lived in (and love) the West Village, there are some great coffee shops there. Blue Bottle Coffee is my favorite. The best way to learn about cool places is just to get out and walk around, honestly. I would definitely suggest walking The High Line, renting a Citi bike and just getting out and exploring!

BI: If you have any time while you’re here, is there any Broadway show you’re dying to see?
KM: I worked with Bernadette Peters on Smash, so I would absolutely love to see her in Hello, Dolly!

BI: Do you consider yourself a traveler?
KM: I do, I’m a big fan of traveling! I used to travel more, but with Scorpion I don’t have the time. Italy is my favorite travel destination; I’m going to be visiting Capri, and Lake Como is on my list.

BI: I have to ask, do you have a favorite kind of pie?
KM: Blueberry pie! I love blueberry pancakes and muffins, blueberry pie, blueberry scones, really, anything blueberry! I find baking to be a more concentrated art, so I typically only do it during the holidays. Just the other day, someone said to me that I have the best pie crust ever, it’s a recipe from the NY Times that calls for vodka. It makes the most flaky and amazing pie crust ever. This role has inspired me to do some baking for my friends.

BI: Lastly, can you sum up what Waitress means to you?
KM: Waitress is a story that’s universally relatable. It’s a journey of someone trying to discover what self-love looks like. It’s an empowering story that everyone struggles with: feeling stuck at a time in their life. How many of us have something we can't do on our own, or that we’re trapped in a situation? It’s the perfect combination of a universally relatable story and beautiful music.


A huge thank you to Katharine for taking time out of her busy schedule to talk with us. We are beyond thrilled to see her step into this role, and April 10 can’t come soon enough for us! You don’t want to miss McPhee making her Broadway debut, so visit the show page below to get your tickets to see Waitress.