Exclusive: Chatting With The Stars Of Kiss Me, Kate

In the constellation of musical comedy masterpieces, Kiss Me, Kate shines as perhaps Broadway's most sparkling achievement… and now it’s back on Broadway! A mix of romance, comedy, and a splash of Shakespeare, it’s no wonder Kiss Me, Kate was the winner of the first-ever Tony Award® for Best Musical.

We got a taste of what was to come when we attended a dance dress rehearsal for the show, but we couldn’t resist learning more! We chatted with stars Kelli O’Hara, Will Chase, Corbin Bleu and Stephanie Styles to get the inside scoop on this revival.


Broadway Inbound: Kiss Me, Kate is an iconic piece of musical theatre. It was the first-ever Tony® winner for Best Musical and has had numerous revivals. What is going to make this production special?

Stephanie Styles: Every person in our creative team and in our cast has approached this production with new ideas, different takes, but with the same desire to preserve the key elements that make this one of the greatest musicals of all time. As for myself, I can say that every time I’ve seen a number I’m not in for the first time…I’ve cried. Sometimes it’s from laughter and other times it’s from seeing my peers’ incredible talent and the contagious enthusiasm the team and our characters have for the theatre.

Corbin Bleu: The creative team and cast that has been assembled for this production is a league of heavy-hitters. Kiss Me, Kate is already such a legendary piece, it demands great storytellers and dazzling performers. I feel truly honored to share the stage with this talented group of people and to entertain audiences with our show that has been given a set of 2019 eyes! 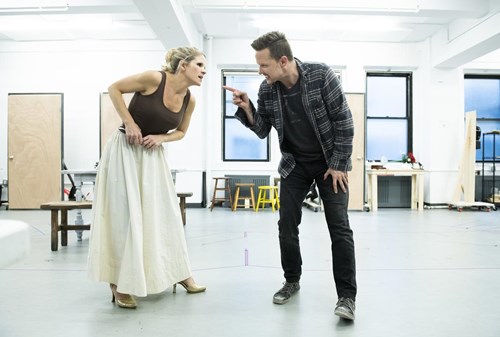 BI: Describe Kiss Me, Kate using 3 words. No cheating, you can’t use “Too Darn Hot.”

BI: What has the rehearsal process been like leading up to previews?

WC: Amazing. Slow and methodical. And magical. Scott and Warren are absolutely brilliant storytellers and dramaturgs. And that just filters down through the cast.

SS: It’s been incredible. Sometimes we had a few numbers fully staged in a day and then there were times we came together with the cast and creatives for hour long discussions on Shakespeare, our characters, and what it means to do Kiss Me, Kate in 2019.

CB: It’s such a big show with so many moving parts it feels like there isn’t enough rehearsal time in the world. This was a tough one, but I believe it’s going to be a scenario of the harder the work the greater the reward. Just ask to see our bruises, they paint a picture of an epic saga in the making. 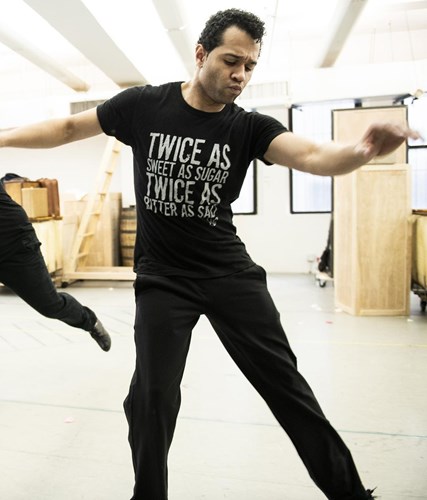 BI: Is there a number in the show that is going to blow audiences away?

CB: I think it’s safe to say there are several. I’ve seen them all for weeks now and they continue to blow my mind!

SS: Kelli O’Hara’s voice is unrivaled and her presence on stage alone is intoxicating, but there’s nothing like seeing her do… well, I actually shouldn’t say just yet, but you get a Kelli O’Hara like you’ve never seen her before during the finale of Act I. I get goosebumps during pretty much any number, but “Too Darn Hot” is a show-stopper. You think they’re done, but then they just keep on plus-ing it and plus-ing it. And my “Tom, Dick, or Harry” men…I’m in awe every single time we run it. It’s hard not naming every number in the show.

BI: When you’re not rehearsing/performing, what do you like to do around Manhattan?

KO: See shows with my kids or go eat at wonderful restaurants.

SS: I love a long walk with a cup of tea and a good friend or great music. That and going out to brunch or an early dinner. Feel free to tweet me if you need any restaurant recommendations!

CB: Well until the rehearsal process is over I’m a complete hermit, but once we open and have more time, I love going to see other shows, spending time in Central Park, eating at my favorite restaurants, and I always enjoy hanging out at Chelsea Piers!

BI: There are a lot of shows to see. Why is Kiss Me, Kate not the one to miss?

KO: Shows like this are the reason we are all here, loving smart musical theatre and trying to advance it into the future as we go.  It’s never a good idea to forget our roots and, moreover, it would be a mistake to miss watching them expand and evolve.

WC: There’s really nothing like it in the theater repertoire. It’s a classic that is still funny and truly entertaining. The score has yet to be topped, I think. And this cast is world class with some amazing performances.

SS: It’s a love-letter to theatre. Why we love it, why we do it, why we see shows, why shows are made, and the power they have of connecting everyone in the community behind the scenes, on stage, and in the audience. And Cole Porter. And Shakespeare. And it’s super funny. And that thing Kelli O’Hara does at the end of Act I… And because I’m having the time of my life.

CB: I hate name dropping, but…Kelli O’Hara, Will Chase, Scott Ellis, Warren Carlyle, Paul Gemignani…oh yeah, and that guy Cole Porter! Even if I wasn’t in it, I wouldn’t want to miss it!


We were delighted to be able to talk to Kelli, Will, Corbin, and Stephanie, and a big thank you to them for taking time out of their busy rehearsal schedule to tell us what we can look forward to in this production. We’re already fired up, and you should be too! Kiss Me, Kate is now playing at the Roundabout Theatre at Studio 54, so visit the show page below to purchase your tickets.