Broadway Pride: All Are Welcome!

June is Pride Month, and nobody knows how to celebrate like New York City! NYC is one of the most open and accepting cities in the world, and Pride is its time to sparkle. As an indicator of its famous inclusivity, helpful “service information” posters have been popping up on the subway talking about “no bigotry, hatred or prejudice allowed at this station at any time.”

There’s a full schedule of Gay Pride events this month, culminating in the massive NYC Pride March on Sunday, June 24. But you can get your Pride on all year long, because if anything in this city promotes love, tolerance, and diversity, it’s Broadway!

Broadway’s bounty of shows that celebrate everyone, regardless of their sexual orientation, gender, color, or creed, is plentiful. Here are our recommendations for celebrating Pride under the dazzling lights of Broadway. 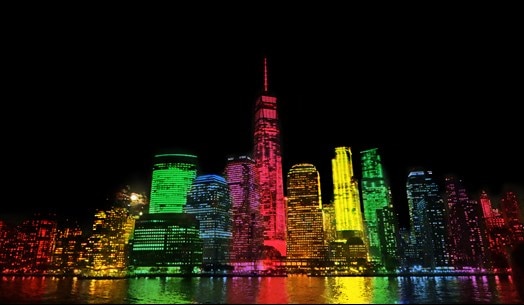 Winner of three Tony Awards® this year including Best Revival of a Play, Angels in America is subtitled “A Gay Fantasia on National Themes” and is widely considered one of the greatest works of the 20th Century. Starring Tony® winners Nathan Lane and Andrew Garfield, this masterpiece is about identity, illness, religion, and what it means to be American.

Broadway’s newest offering is Head Over Heels, the fresh and flashy new musical that’s a hilarious and sexy celebration of love in all its infinite varieties. Set to the iconic music of the 1980's all-female rock band The Go-Go's, it includes the hit songs “We Got the Beat,” “Our Lips Are Sealed,” “Vacation,” “Heaven is a Place on Earth,” and many more! And if that’s not enough for you, RuPaul's Drag Race fan favorite Peppermint makes her Broadway debut and is the first performer who identifies as a trans woman to originate a principal role on Broadway.

Of course, you can’t miss out on Kinky Boots. Inspired by true events, Kinky Boots tells the story of Charlie Price, who inherits his father's shoe factory. Looking to save the family business, Charlie turns to a fabulously fashionable new friend—cabaret star Lola—who gives him an outrageous idea that could change both of their destinies. An exuberant story about finding friendship, inspiration, and passion where you least expect, proves that you change the world when you change your mind

Coming to Broadway this fall is The Prom. A new a totally original musical, The Prom is about a group of fading Broadway stars who take up celebrity activism. When they hear about a high school student in Indiana who is butting heads with the parents in her town—all because she wants to take her girlfriend to her prom—they take it upon themselves to intervene.

Also opening in the fall is Torch Song, starring Michael Urie in a limited engagement after a smash-hit run Off-Broadway. Hilarious and heart-wrenching, Harvey Fierstein’s 1982 play follows Arnold Beckoff’s odyssey to find happiness in New York. All he wants is a husband, a child, and a pair of bunny slippers that fit, but a visit from his overbearing mother reminds him that he needs one thing more: respect.

The 2018 Pride March will take place between 12:00 PM and 9:30 PM, so there’s plenty of time to catch a Broadway show and still join the march, as well as participate in all the other activities going on this month. For more information about Pride events around NYC, visit https://www.nycpride.org/.