Broadway Inbound’s Poppets Get a Peek at Mrs. Doubtfire

Every once in a while, the Broadway Inbound team gets a special treat—the chance to preview a brand-new show before it comes to Broadway. Recently, the team was flown out to Seattle’s gorgeous 5th Avenue Theatre to catch Mrs. Doubtfire, starring the multi-multi-talented Rob McClure (Beetlejuice, Something Rotten!) in the title role.

Before the show, BI’s sales and marketing leaders were treated to dinner with some of the creators of the new musical. Producer Kevin McCollum (Rent, Avenue Q) said he’s really excited for the show to start performances at the Stephen Sondheim Theatre in March, and that the creative team has been hard at work, tweaking and fine-tuning the show to be Broadway-ready.

BI staff also had the chance to chat with John O'Farrell (Something Rotten!), who wrote the book for Mrs. Doubtfire. O’Farrell explained that because he already had such great source material in the original Robin Williams film, it wasn’t hard to find the heart and humor in the story.

The show is definitely both hysterical and heartfelt. McClure—as Daniel, a struggling, out-of-work actor with (maybe) too much of a funny bone—dazzles the audience with his versatility. Physical comedy, impersonations, accents, singing, dancing; he can do it all. 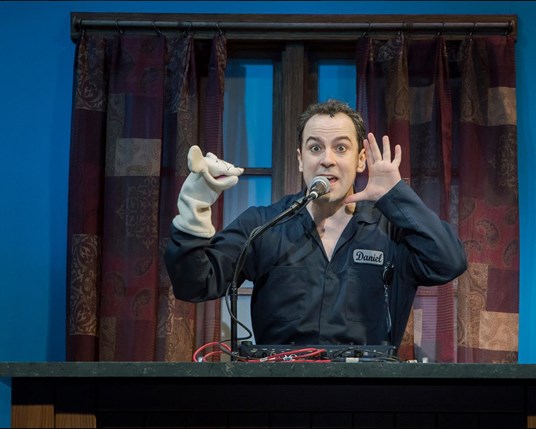 After losing custody in a messy divorce, Daniel disguises himself as Scottish nanny Euphegenia Doubtfire in a desperate attempt to stay in their lives. As his new persona begins to take on a life of her own, Mrs. Doubtfire teaches Daniel more than he bargained for about how to be a father.

Of course, there’s more to Mrs. Doubtfire than just Mrs. Doubtfire. A talented cast of Broadway veterans fills out the rest of the show with hilarity and emotion, including Jenn Gambatese (School of Rock) as Miranda (THE WHOLE TIME?!?) and Brad Oscar (The Producers, Something Rotten!) as Daniel’s brother who helps him make his transformation.

Broadway Inbound is so thankful to Mrs. Doubtfire for the opportunity to preview the show and can’t wait to see on the Broadway stage next year. It’s the next big musical comedy for families—of all kinds.