Broadway Inbound Gets "Screeched In"

In the new Broadway musical Come From Away, audiences get a glimpse of a Newfoundland tradition: the screech-in. It's a lot of fun to watch, but, as our staff recently learned, it's even more fun to experience. Petrina Bromley, Joel Hatch, and Caesar Samayoa, three of the stars of Come From Away, dropped by our office to give us a taste of what it's like to be "screeched in."

The screech-in ceremony is performed by locals to those who "come from away," which means anyone who isn't from Newfoundland. The ceremony must be performed by a Newfoundlander, and Petrina Bromley was happy to oblige. "Are ye a screecher?" she asked. In unison, we chanted, "'Deed I is, me ol' cock! And long may yer big jib draw!" Apparently, this means something to the effect of "Yes I am, my old friend, and may your sails always catch wind." We then took a swig of Newfoundland Screech, which is a type of rum.

Luckily, our ceremony was a little different from the one that features in Come From Away: for instance, we didn't have to kiss a large cod. Nevertheless, after a wonderful afternoon of talking to the cast, we all felt like we were practically native Newfoundlanders. Come From Away is now playing on Broadway, and group tickets are available by visiting the show page below. 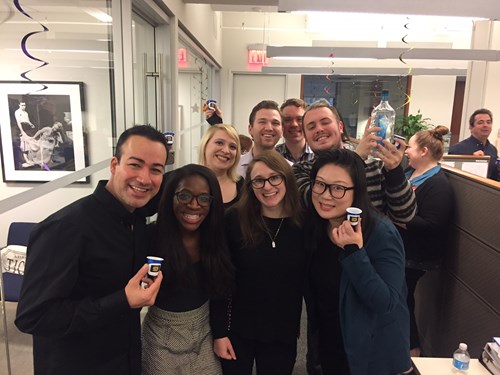 TAGS: COME FROM AWAY, BROADWAY