An Exclusive Interview With The Cast Of The Prom

The Prom, Broadway’s new musical comedy (with issues) follows four Broadway stars on a hilarious mission to change the world and get a little publicity for themselves. When they hear about a high school student in Indiana who is butting heads with the parents in her town—all because she wants to take her girlfriend to her prom—they take it upon themselves to intervene.

Although the show doesn’t start performances until October, we sat down with the cast to find what makes this show a must-see, why it’s so relevant now, and how comedy helps deliver a message (along with lots of laughs!)


Broadway Inbound: The story behind The Prom is so relevant in this day and age. Why now, and why Broadway?

Michael Potts (Mr. Hawkins): We just had the SCOTUS rule in favor of a Colorado baker who refused, on personal religious grounds, to make a wedding cake for a gay couple. Before that, in 2014, we had the Hobby Lobby ruling. Therefore, despite the court’s 2015 ruling in favor of gay marriage, the fight for equality and inclusivity continues.

Josh Lamon (Sheldon Saperstein): I wish I had this show growing up. It celebrates our differences and flaws. It is a show where you can laugh till you cry and cry till you laugh. What resonates with me is the show is truly about a community rising up. With our world being so torn apart right now, it is constantly teaching me to take a breath and give out love.

Angie Schworer (Angie): Stevie Wonder said, “What I’m not confused about is the world needing much more love, no hate, no prejudice, no bigotry and more unity, peace and understanding. Period.” That’s why this story needs to be told. And on Broadway, because it’s in the best city in the world and Broadway reaches millions of people.


BI: What message and/or feeling do you want audiences to leave with after seeing The Prom?

Caitlin Kinnunen (Emma): I want people to leave feeling enlightened and more open minded! This show has such a great message of acceptance and joy, it’s important for me to have people leave feeling that.

Brooks Ashmanskas (Barry Glickman): I want them to leave feeling happy, entertained and if they exit the theatre a bit more tolerant of people who are different than they are: GREAT!

Courtenay Collins (Mrs. Green): I know they will laugh their heads off and they will see some amazing dancing and have some incredible tunes in their heads. For some, it will remind them of their own personal high school experiences and it will rock their emotional world and give them validation. For others, it might shed some light and maybe soften some hard edges of prejudice that have been built up by misunderstanding or fear. 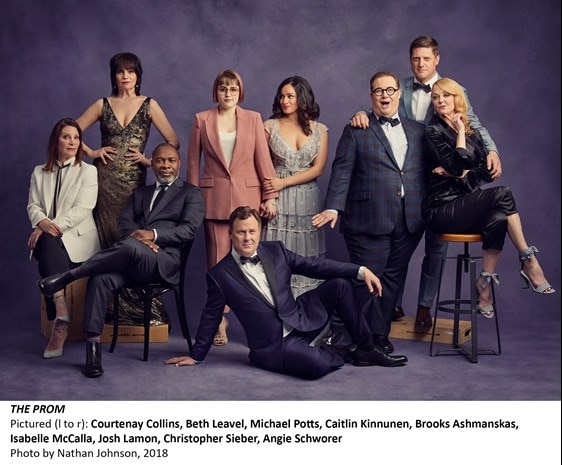 BI: This show deals with something so timely, yet is so fun. Can you talk about how the comedy helps carry this story?

Beth Leavel (Dee Dee Allen): I love when I leave a show being entertained and ultimately moved, informed or enlightened. Because a story has made me listen without screaming to me. The laughter made it more relatable and I’m able to see myself in these beautifully flawed characters.

Isabelle McCalla (Alyssa Greene): Comedy allows us to process situations that can be serious and infuriating. Good comedy can make an audience see the hypocrisy or the ridiculousness of any certain situation.

Ashmanskas: Comedy is always a great way to communicate. To hold our vices up to the magnifying glass of comedy evens the playing field, I think. We’re ALL worthy of being poked fun at; to laugh at ourselves!

Lamon: Comedy helps everything. I got into comedy because that is how I cope. I think laughter helps. I believe that in times like these with our country as divided as it is and our world being as divided as it is, laughing matters most of all. Laughing is SO healthy! It helps take away the tension. It is like an apple for your brain and heart.


BI: You’re working on a Broadway show where some of the characters are Broadway performers. Was it fun being able to poke fun at your own industry?

Christopher Sieber (Trent Oliver): We play Broadway actors who are in a way, very similar to who we are, with some exaggerations of course! The exciting thing about our show is that audiences are really going to relate or recognize our characters because they have seen us and or the archetypes we are playing. The theatre district is about an 8 block radius, and these Broadway stars we portray are in that 8 block bubble where they are super famous. When they leave that bubble, no one knows who they are. So the desperation for attention is palpable when they leave and their super powers are somewhat useless.

Leavel: It is so much fun to poke fun at people in our industry! First, because it’s us, and the comedy is so well written! All of us can see ourselves in these fabulous, high maintenance, delicious people. I call Dee Dee Allen my evil twin.

Lamon: I LOVE being able to lampoon the Broadway and Entertainment Industry. The amazing thing about Bob and Chad’s script, is their writing is so brilliant, you don’t need to be an industry insider to get the jokes. I have never seen jokes land like this in my entire career.

Ashmanskas: Of course! It’s also a great jumping-off point to witness these seemingly silly characters turn into “real” people and to feel for them and, hopefully, root for them.


Stay tuned for part two of our interview, where the cast shares their personal experiences with prom and gives some advice to students in high school today