Adam Rapp’s plays have been produced both in and outside of New York City for years. His play Red Light Winter was even a Pulitzer Prize finalist. But his newest play The Sound Inside, marks an important first: it is the first time one of his plays will be produced on Broadway.

We sat down with Rapp to talk about the show, his process and how it feels to be making his Broadway debut.

Broadway Inbound: What are your plays before they are plays? Do they start off as an image, a question, a character?
Adam Rapp: Often I’ll think about an arrangement of people in a room that either frightens or intrigues me in some way. Sometimes that room isn’t necessarily a room; it could be a void or a forest or the edge of a river. If I can’t shake it — if the thing keeps haunting me — then I start musing about the people who won’t leave this space, what they want from each other, what’s at stake, and all of that.

BI: What was that for The Sound Inside?
AR: I was thinking about two extremely lonely people sitting across from each other at the table of a small eat-in kitchen and one of them wanted very badly to disappear. I didn’t know which one wanted this. What I did know was that the two characters were a middle- aged professor and one of her young students.

BI: What’s it like taking a script from the page to Broadway?
AR: It’s actually been a rigorous and faithful extension of the work we did at Williamstown. Director David Cromer and I always thought of that production as a draft of the play. A lot was accomplished, but we simply ran out of time. These past weeks have given us an opportunity to deepen moments, make trims, and find new material that we couldn’t get to last summer. I honestly never thought the play would have this kind of life. I didn’t anticipate the Broadway premiere at all. I got to the point in my career where I accepted that this level of exposure as a playwright wouldn’t happen for me.

BI: How does it feel to be making your Broadway debut as a writer?
AR: It’s incredibly exciting. I’m used to a few hundred people at a time, or 99, or sometimes even fewer than that, seeing my work. The fact that we’ll be playing in a house that seats over 1,000 is wild. It makes me feel like I’m starting all over, like I’m in my early twenties again and walking around Manhattan with fresh legs. 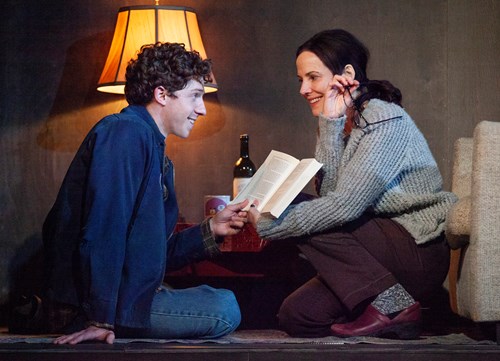 BI: You have two powerhouse actors, Mary-Louise Parker and Will Hochman, performing your words. What’s that like? Do they ever surprise you?
AR: They are both so intelligent and such diligent, hard workers. I’m spoiled. Mary-Louise has a sea of words to memorize and during rehearsal she gets so angry with herself when she drops a word or inverts a phrase. They both have this insatiable desire to get the words right. And this is a play about how people use language, so that is really satisfying to watch. And Will is so versatile. He’ll make a choice, take direction from Cromer, and shift gears with such ease. He really makes it seem effortless. I’m amazed that he was an Econ major in college. The most surprising thing about the two of them is that they’re both incredible athletes! During a break the other day they both did a four-minute plank!

BI: The Sound Inside was well received last summer at Williamstown. Has the play evolved since then?
AR: Nothing structurally has changed, but we’ve worked hard on deepening Bella and Christopher’s connection throughout so that the big ask in the play feels appropriately earned. Some of the smaller moments are richer and sharper, and, in a few cases, a little uglier, but nothing major has changed.

BI: Who is The Sound Inside for? Who do you most hope sees this play?
AR: My obvious answer is that I’d like to think that college kids and the parents of those kids could see the play. But beyond demographics, the play is really about loneliness, how for many of us, we arrive at these moments in our lives when we might realize that we don’t have much of a support system. How isolation can lead to darkness. I hope that anyone who has gone through those seasons in their life and who happens to also be interested in the theatre will find this play.

BI: What advice do you have for aspiring playwrights?
AR: Write about what scares you.

BI: Any favorite spots in NYC? Aside from Broadway, what shouldn’t visitors miss?
AR: Cafe Mogador in the East Village.

BI: Of all the plays on Broadway, why is The Sound Inside the one to see?
AR: Because you will be seeing Mary-Louise Parker at her very best. She is hilarious and heartbreaking and her performance is so brave. You will also see the debut of Will Hochman and you’ll be able to say that you saw him first, before he got gobbled up by Hollywood and everyone else. And it is being directed by one of our great Masters, David Cromer, whose work is so assured and so clear and fearless.

Thank you to Adam Rapp for finding the time to talk with us in the midst of opening a show! Don’t miss his incredible new play—click on the show page link to book your tickets now!

TAGS: THE SOUND INSIDE