It’s fall in NYC, and Halloween is just around the corner!

Every New Yorker knows that the best place to celebrate Halloween is at the Village Halloween Parade. In fact, it’s sort of a New York City rite of passage—everyone has to go at least once in their life.

Every year, tens of thousands of people join the spooky procession as it marches through Greenwich Village, trailing behind the street performers and towering puppets leading the way. Whether you’re dying to participate in the ghoulish revelry or just curious to get a glimpse of the spooky spectacle, here’s your guide to making the most of this NYC Halloween tradition.

Bare bones. First, the basics: Spooks will gather on Sixth Avenue at Canal Street in SoHo. General line-up begins at 6:30 pm, and at 7:00 pm the parade begins to creepy-crawl all the way up to 16th Street.

Avoid the horde. If you are meeting up with other members of your group, pick a spot a couple of blocks away where it’s easier to find each other. Then head to the parade together.

Come as you aren’t. It’s Halloween after all! Anyone in costume can join the parade, so get inspired by some of the incredible creations from years past, or just stop by a costume shop—this is your chance to go bump in the night!

Stake out a spot. If costumes aren’t your thing, you can always find a place along Sixth Avenue to watch the festivities. We suggest grabbing a spot along the first couple blocks of the route (just north of Spring Street) or the last (just south of 16th Street). The parade is quite the spectacle, and it can get crowded along the middle of the path.

Lift your spirits. The parade technically ends at 11:00 pm, but that’s well before the witching hour. Stick around; the party continues at many Greenwich Village haunts.

The Show to See Now: Beetlejuice 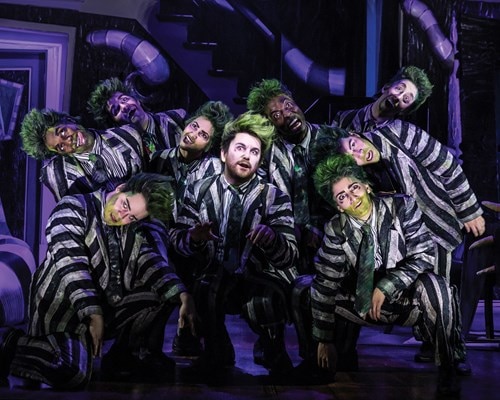 If you’re looking for a show to pair with your Halloween festivities, look no further than Beetlejuice. The ghost-with-the-most makes his Broadway debut in this hilarious new musical comedy based on Tim Burton’s dearly beloved film.

Beetlejuice tells the story of Lydia Deetz, a strange and unusual teenager whose whole life changes when she meets a recently deceased couple and a demon with a thing for stripes. With an irreverent book, an astonishing set, and a score that will have you tapping your feet long after you’ve shuffled off this mortal coil, Beetlejuice is a must-see spectacular that will “dazzle the eyes!” (New York Post). And under its uproarious surface (six feet under, to be exact), it’s a remarkably touching show about family, love, and making the most of every Day-O!