BUY GROUP TICKETS Need Fewer Than 8 Tickets?
Dog Man: The Musical is a hilarious family musical based on the worldwide bestselling series from Dav Pilkey, the creator of Captain Underpants.

Best buds George and Harold have been creating comics for years, but now that they’re in 5th grade, they figure it's time to level up and write a musical based on their favorite character, Dog Man, the crime-biting sensation who is part dog, part man, and ALL HERO!! How hard could it be?

With the head of a dog and the body of a policeman, Dog Man loves to fight crime and chew on the furniture. But while trying his best to be a good boy, can he save the city from Flippy the cyborg fish and his army of Beasty Buildings? Can he catch Petey, the world’s most evil cat, who has cloned himself to exact revenge on the doggy do-gooder? And will George and Harold finish their show before lunchtime?? Find out in this epic musical adventure featuring the hilarity and heart of Dav Pilkey’s beloved characters.

The show is written by Kevin Del Aguila and Brad Alexander, who collaborated on the Emmy-winning series Peg + Cat on PBS, TheaterWorksUSA’s Click, Clack, Moo, and Clifford The Big Red Dog on PBS and Amazon.

“You have to love a family show that makes adults laugh, too.” - New York Times

“This show is perfect for everyone.” – Newsday

“So @HamiltonMusical was a game-changer for Broadway shows. It was new, fresh, different, brilliant, etc. I put #DogManTheMusical in the same category. What a great way to introduce young people to the stage with something to which they can relate.” - Craig, Dog Man fan on Twitter

“As Dickens might say, it’s a far, far better show they’ve done than many I’ve seen before. Dog Man should be every kid’s best friend.” – Theater Life

“Non-stop enjoyment from beginning to end.” – Plays To See

Recommended for ages 5 +
Children under the age of 4 are not permitted in the theatre.

1 hour and 30 minutes, including on 15 minute intermission 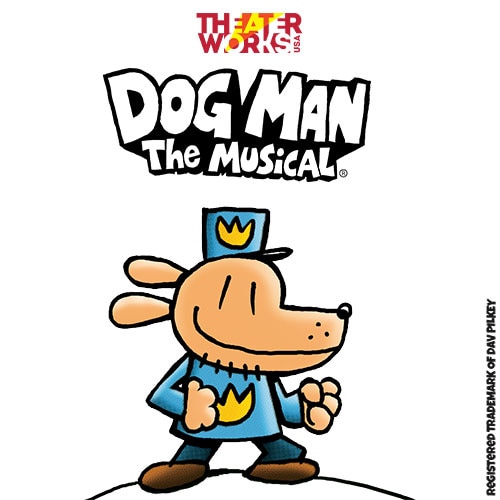